Music in the Square 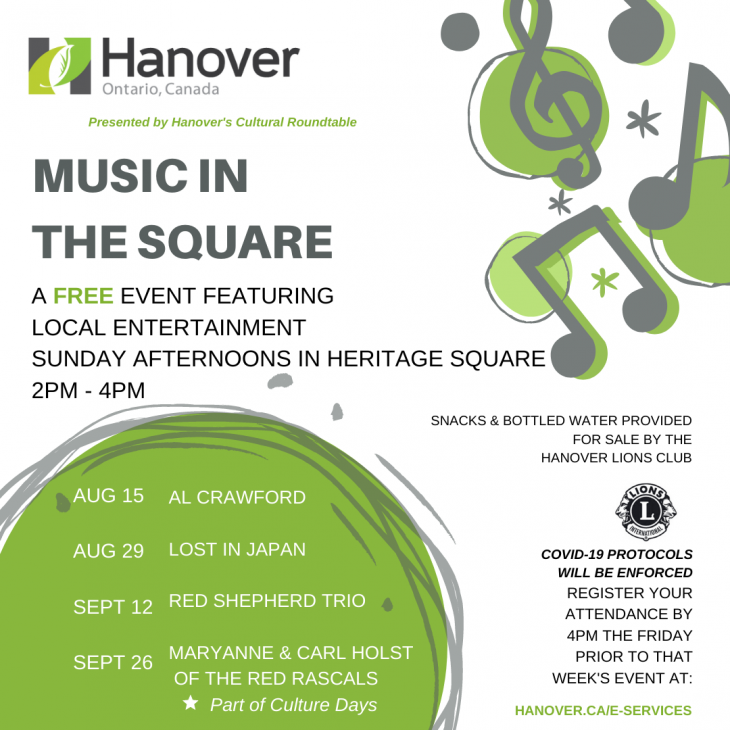 Hanover’s Cultural Roundtable is pleased to announce Music in the Square, a series of free events featuring local entertainment, set to happen on Sunday afternoons in Heritage Square. From 2pm-4pm on August 15, 29, September 12 and 26th, as part of Culture Days, patrons will enjoy live music in the heart of our downtown. Food and refreshments will be provided for sale by the Hanover Lions Club. COVID-19 protocols will be enforced and the public is asked to register their attendance by 4pm the Friday prior to that week’s event at Hanover.ca/e-services.

“The Town of Hanover is excited to announce its four-part 2021 Music in the Square lineup to highlight special talent that represents the spirit and soul of our community,” said Mayor Sue Paterson. “I am thrilled with this perfect opportunity to celebrate. Local artists will bring us together to enjoy some great entertainment,” she added. “We’ve been through a challenging time and music is one way to help us heal. It often tells a story, connects us, and reflects our cultural characteristics. I hope you’ll come and join in on the fun.”

Al Crawford is a singer, songwriter and musical performer originally from Hanover. He has been entertaining     throughout Ontario since 1974. He has performed as a single, in many duos, and with numerous backup groups   at virtually every kind of event where music entertainment prevails, from small town honky tonks to major folk   festivals, radio and television shows. For over 25 years Al and his late partner, Paul Bray, were known as “Late   Night Radio”. For the past 5 years Al has performed as a one man band using backing tracks recorded and   produced at his home studio. Showcasing a wide range of music with his own brand of humour, Al is looking  forward to launching the first Music in the Square event on August 15th.

Lost In Japan provides listeners with a relatable depiction of love through the use of metaphorical lyrics. Without sacrificing the likeable elements of past releases, Lost In Japan has began to explore and expand new sounds and elements by working with new producers, including Juno award winning producer, Dan Brodbeck at Sugar Shack Studios in London, ON. The groups will come back to their roots to entertain Hanover on August 29th.

Whether you enjoy Jimi Hendrix, Matt Mays, Cat Stevens, the Beatles or Dion- you will enjoy the varied musical   style of Red Shepherd Trio. RST is a newly minted local group whose roots go back to the Kung Fu Lawyers, The   Big Shiver, and Dan Fogelberg Crisis. Featuring Greg Schnurr on lead guitar and vocals, Greg McLean on drums   and vocals and Rick Popiez on bass, Red Shepherd Trio is bound to play something you will enjoy on September 12th.

The Red Rascal Band was formed by Maryanne and Carl in Hanover in 1999. Many performances over the years have provided many good times and adventures for the couple through which they've met great friends and acquaintances. After moving to a century farm in 2009, Carl and Maryanne surprised a crowd of 200 on August 27, 2011 with a surprise wedding at their camp out event. Their farm and jobs keep them busy these days but always accept an invitation to perform if asked. They are hoping you will enjoy their style of classic country music on September 26th, as part of Culture Days.

Councillor Dave Hocking and Chair of Hanover’s Cultural Roundtable is thrilled to invite the public to come to Heritage Square to enjoy this series of safe events. “In an effort to promote the arts and culture in our town we, the members of the Cultural Roundtable, are extremely pleased to sponsor free Music in the Square concerts during August and September,” Hocking promoted.

We're celebrating Mayor Paterson's #Top10 2021! Tune in each weekday at noon as we countdown. #3 is Economic Develo… https://t.co/qPpX97QOqt

Positive Power: Tune into Family Feud Canada tonight to cheer on the Ballagh's! We are joining the movement and pro… https://t.co/zaEBwbOqjN